When taking the derivative of an image, you’re actually taking what’s called a discrete derivative, and it’s more of an approximation of the derivative. One simple example is that you can take the derivative in the x-direction at pixel x1 by taking the difference between the pixel values to the left and right of your pixel (x0 and x2).

There are a number of sources I’ve used for learning about this topic.

Dr. Shah’s video lecture begins with a quick refresher on the definition of a derivative in Calculus. In calculus we have continuous valued functions, but with images we have discrete data.

The first equation below shows the calculus definition of a derivative. With image data, the smallest possible delta x is 1, so we use the second and third equations to approximate the derivative. 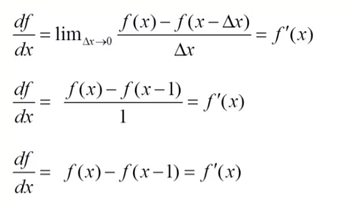 Taking the difference between x and x-1 is just one possibility, and is called the “backward difference”. The other options are: 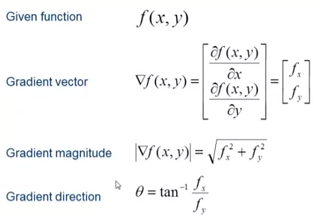 To compute the derivative with respect to x at a given pixel, it sounds like in practice, to reduce the affects of noise, we:

Apply the mask by multiplying each component of the matrix with the corresponding pixel value (the pixel of interest is at the center of the matrix) and sum them all up.

Again, we could just use the middle row for fx and the middle column for fy, but we include the surrounding pixels to help reduce the affect of noise.

We can’t apply the mask to the border pixels so we don’t, the derivative at those pixels is set to 0.

He doesn’t mention this until he talks about edge detectors later on, but the derivative mask he’s using here is called the Prewitt operator, and you can read more about it on Wikipedia: http://en.wikipedia.org/wiki/Prewitt_operator. The Prewitt operator omitts the 1/3, I’m guessing for the sake of computational efficiency.

Both lectures provide the following image as an example of the derivative with respect to x and y.

The significance of the greyscale values in these images had me confused for a while. The reason the images are mostly grey is that the value of the derivative actually ranges from -255 to 255, but to visualize it we must scale this to the range 0 to 255. So anywhere the derivative is zero (no edge), it’s given the value 128 (a neutral grey).

Also notice how, in the df/dx image, a horizontal transition from light to dark (like the side of her face) is colored white, while a dark to light transition (like on her hand) is colored black.

We measure the strength of an edge by combining the df/dx and df/dy values, as shown below.