In this post, I provide a detailed description and explanation of the Convolutional Neural Network example provided in Rasmus Berg Palm’s DeepLearnToolbox for MATLAB. His example code applies a relatively simple CNN with 2 hidden layers and only 18 neurons to the MNIST dataset. The CNN’s accuracy is 98.92% on the test set, which seems very impressive to me given the small number of neurons.

The code is neat and well written, and I think it’s a huge service to the engineering community when people share their code like this. That said, there’s almost no documentation, explanation, or comments provided, so I’m attempting to partially rectify that here. Down at the bottom of the post you can find a link to my documented / commented versions of many of the CNN functions.

Before we dive in, I think it’s worth pointing out that the CNN code in the DeepLearnToolbox is a few years old now, and deep learning has been evolving rapidly. Other than the fact that it’s a multi-layered Convolutional Neural Network, this code doesn’t appear to use any of the innovations typically associated with “Deep Learning”. For example, there is no unsupervised feature learning going on here, or layer-wise pre-training. It’s just back-propagation over labeled training examples. Also, it still uses the sigmoid activation function, and it seems to me that a lot of current deep networks appear to use other activation functions such as “ReLU”.

That said, I’ve found the code very informative for helping me understand some of the basics of CNNs. At only 18 neurons, the example network is fairly small and simple (relatively speaking–even small CNNs can feel like a rat’s nest of parameters and connections!). So if your goal is, like me, to learn more about CNNs, keep reading on.

If you really just want a good library for building state-of-the-art CNNs, you might look elsewhere. There’s an extensive list of libraries here, but it doesn’t seem to be very well organized by quality or relevance. You might find some helpful guidance from these discussions on reddit in /r/machinelearning here and here.

Where I’m Coming From

The Stanford tutorial was very helpful, and you even get to build a CNN in the last exercise. However, it uses different terminology and coding styles than some of the other important work out there, and doesn’t show you how to build a CNN with multiple hidden layers. I found this DeepLearnToolbox MATLAB code to be very informative for filling in some of my missing knowledge.

One of the most helpful aspects of this exercise for me has been the chance to learn some of the terminology used by Convolutional Neural Networks. There are a lot of redundant terms here. It’s not a terrible thing, though; each different label can help you interpret the same concept in a different way. The key is just knowing what they all mean.

Some of the language in CNNs seems to be taken from image processing. In image processing, a common operation is to apply a filter to an image. The filter has a small “filter mask” or “kernel” which is “convolved” with the image. (If you’re unfamiliar with filters and convolutions, I have a post on it here, though it’s not my best work :) ).

If you think about the operation performed between the filter mask and a single patch of the image, it’s the same basic operation as an MLP neuron–each of the corresponding components are multiplied together, then summed up. It’s the same as taking the dot product between the image patch and the filter mask if you were to unwind them into vectors. The difference in terminology really just comes from the 2D structure of the image.

So when you see the words “filter” or “kernel”, these just correspond to the weights of a single neuron.

Another term I like to use for these same weight values is “feature”. The techniques in Unsupervised Feature Learning show us that we can really think of a neuron’s weights as a particular “feature” that the neuron is responding to.

But wait, there’s more! CNNs introduce another term, which is very helpful in reasoning about them. The result of a convolution between a single filter mask and an image is referred to as a “map”. A single map is a 2D matrix which is the result of applying a filter over the entire image. Note that the map will be a little smaller than the image (by the width of the kernel), because the filter can’t be applied past the edges of the image.

Each layer of a CNN will output multiple maps, one for each of the “neurons” / “kernels” / “filters” / “features” in that layer.

Each layer of the CNN applies its filters to the maps output by the previous layer.

To understand a particular network architecture, I think it makes the most sense to start by looking at the feed-forward operation. 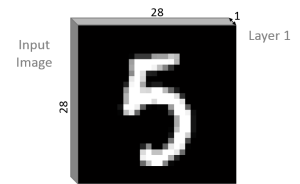 For this example, we’re working with the MNIST hand-written digit dataset. The input to the CNN, therefore, is a 28x28 pixel grayscale image. This is the input to the network, but we also treat it in the code as the “output of layer 1”. 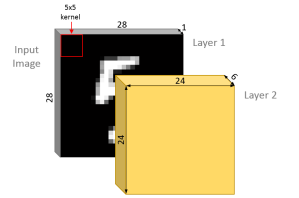 The first hidden layer of the network, “Layer 2”, is going to perform some convolutions over the image. The filter mask will be 5x5 pixels in size. Convolving a 5x5 filter with a 28x28 pixel image yields a 24x24 filtered image. This layer has 6 distinct filters (or 6 neurons, if you like) that we’re going to convolve with the input image. These six convolutions will generate 6 separate output maps, giving us a 24x24x6 matrix as the output of layer 2. 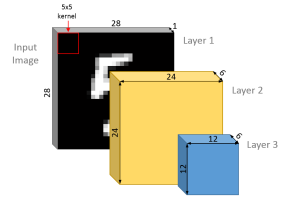 Layer 3 is a pooling layer. The pooling operation we’re using here is just averaging, and the pooling regions are very small: just 2x2 pixels. This has the effect of subsampling the output maps by a factor of 2 in both dimensions, so we get a 12x12x6 matrix. 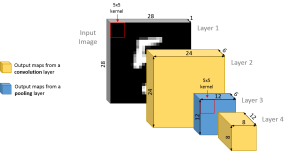 Layer 4 is another convolution layer. Again we’ll use a kernel size of 5x5. In Layer 4, we have 12 distinct filters that we will apply. That is, it contains 12 neurons.

There is an important detail here, though, that you don’t want to miss. When we performed our convolutions on the original input image, the image only had a depth of 1 (because it’s grayscale). The output of Layer 3, though, has a depth of 6.

A single neuron in layer 4 is going to be connected to all 6 maps in layer 3.

There are different ways of thinking about how this is handled.

One way is to say that our Layer 4 filters have a size of 5x5x6. That is, each filter in Layer 4 has 150 unique weight values in it.

In the code, however, convolutions are only done with two-dimensional filters, and it becomes a little hairy to describe. Instead of having 12 5x5x6 filters, we have 72 5x5x1 filters. For each of the 12 Layer 4 filters, there are 6 separate 5x5x1 kernels. To apply a single Layer 4 filter, we actually perform 6 convolutions (one for each output map in Layer 3), and then sum up all of the resulting maps to make a single 8x8x1 output map for that filter. This is done for each of the 12 filters to create the 8x8x12 output of Layer 4.

Finally, we perform one last pooling operation that’s identical to the one in Layer 3–we just subsample by a factor of 2 in each dimension. The resulting output maps are unwound into our final feature vector containing 192 values (4x4x12 = 192).

This feature vector is then classified using simple linear classifiers (one per category) on the output.

Some final notes on the code:

To get the example code, first download the DeepLearnToolbox from its GitHub page. It’s just a directory of MATLAB functions, so there’s nothing special you need to do to install it other than adding it to your path.

Then, you can download my commented / documented code here and replace the corresponding files.